The late Chan Master Sheng Yen, founder of Dharma Drum Mountain, once said: “The ultimate goal of Chan is the realization of one's true nature and the expression of this realization in our interactions with others. The goal is nothing less than the attainment of our full potential as Buddhas -- the embodiment of wisdom and compassion.”

How did the Buddha practice? And how can we learn to practice like the Buddha? To benefit ourselves while benefiting others, in the present day full of stress and chaos? Let’s find out from Zarko, on this auspicious day of Buddha’s birthday - how did the Buddha practice and how he practices as Dharma Heir of our late Founder. Most importantly, how we can learn the way of practice to better ourselves while for the greater good of this world.

Zarko Andricevic
Founder of Dharmaloka Buddhist Community and Buddhist Centre in Zagreb, Croatia. Born in 1955, he became interested in Oriental philosophy very early on, when still a gymnasium student. He encountered Buddhism in 1975 while searching for the spiritual roots of the disciplines he was practising and teaching (martial arts and yoga) and formally received the Refuges and Precepts in 1977. In the mid-80's he started the first Buddhist study and meditation group in Croatia which in time grew to become the first Buddhist community in the country, nowadays known as Dharmaloka. In 1996, while seeking a new teacher, he met Chan Master Sheng Yen, attended his seven-day retreat and became one of his students. Seeing Chan as the very core of the Buddha Dharma and Master Shen Yen as the man whose teaching stems directly from the meditative experience, he dedicated himself to the practice of Chan meditation and attended Master Sheng Yen's retreats regularly. In June 2001, during a two-week retreat in the USA, Zarko received Dharma transmission from Master Sheng Yen, thus becoming one of his five Dharma heirs in the West. Since then he has become an established Chan master, teaching in the USA, Switzerland, Slovenia, Norway, Germany and Taiwan, in addition to his home country. He is a regular member of the Conference of the Western Buddhist Teachers and the European Buddhist Union Council member. He attends numerous interreligious conferences and is actively promoting religious and ethnic tolerance both in this country and abroad. 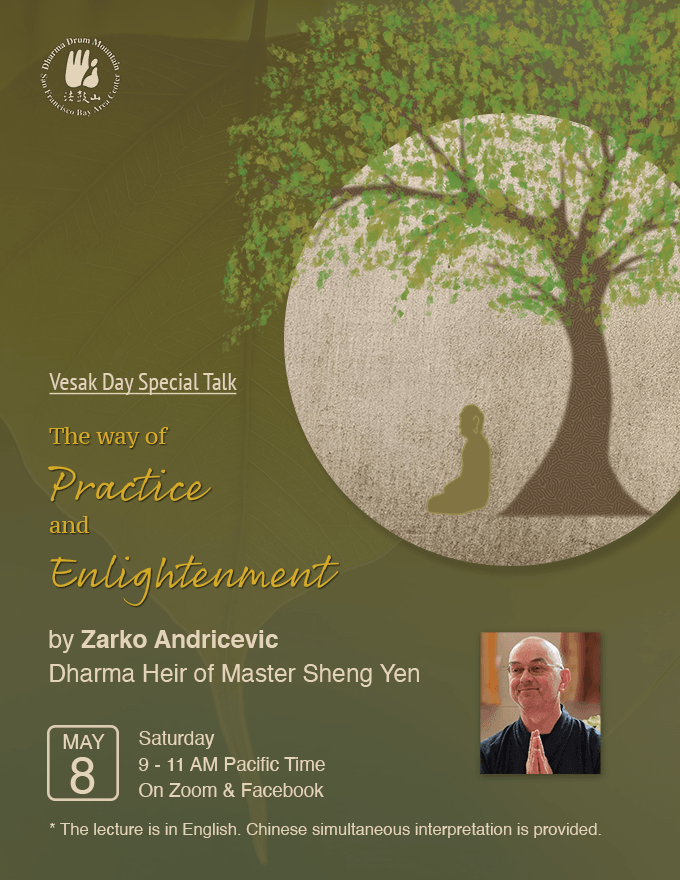